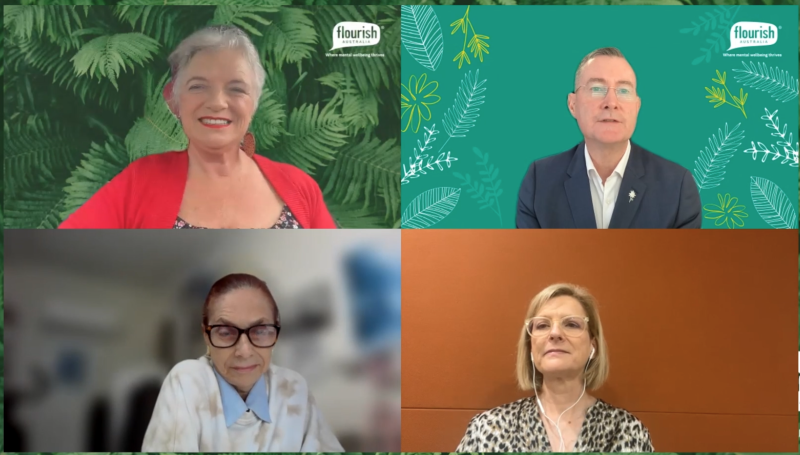 Our own Jade Ryall, offered a warm acknowledgement of Country for Flourish Australia’s free online webinar for Mental Health Month on Friday 21 October, themed ‘Let’s Do Lunch With Ellen Fanning’. Best known to many of us for her part in The Drum, Ellen invited Flourish Australia’s CEO, Mark Orr, and General Manager Inclusion, Fay Jackson, to join the conversation.

Ellen offered insights to why mental health issues are so often sensationalised in the media, while the stories of hope and recovery championed by our organisation seldom make headlines. She reflected on her frontline experiences with systemic issues underlying stigmatised perspectives, within the media and society as a whole. “With The Drum, we have done a lot of work around young people in detention in this country and the majority have experienced trauma, generational issues, and sometimes foetal alcohol syndrome, yet the tone of media coverage is ‘look at the damage they’ve done.”  In the absence of a trauma-informed approach, reporting often fails to dive behind what might be driving the behaviour.

Fay suggested this reflects our lack of awareness of alternatives. “In Portugal, people with drug and alcohol issues are no longer charged, instead the money that would have been spent on courts and gaols is invested in their recovery.”

Are mental health issues ever an excuse for bad behaviour?

Ellen challenged us all to unpack media representation of Australian politician John Barilaro’s inability to give evidence at a parliamentary inquiry due to mental health issues. “There was an attitude that acceptance of his inability to cope with extreme stress was somehow naïve or soft,” Ellen said. The panel agreed that we should avoid viewing a person and their behaviour, independent of their lived experience.

In a short video clip, mental health advocate, Mitch Wallis said, “Mental health can never be an excuse for bad behaviour which we must call out privately and calmly with clear action points, right away to change the false narrative I’m believing about myself..” Fay agreed, “The research tells us that when we fail to do that, the behaviours get worse.

When mental health is wielded as a weapon

In competitive newsrooms and the world of politics, Ellen has witnessed the weaponising of mental illness. “Saying that someone is ‘unstable’ is too often hurled like a poison dart to diminish a person’s capability or credibility.”

Mark said, “It’s problematic when our society tends to do is say ‘you’re either in our you’re out of the ‘in crowd’. Fay added. “We must stick to evidence based truths, for example, the fact is people with complex meatal health issues are far more likely to experience violence than to be violent towards someone.”

The upshoot of the discussion was, to be a responsible and contributing member of our community means speaking and behaving in ways that are respectful of other people’s feelings. “We need to get better at stepping out of our shells to meet each other as fellow human beings, showing each other kindness.” Mark said. Fay added “We can connect by sharing our vulnerability, recognising that it’s part of our human experience, not about being seen as broken in some way.”

What the audience wanted to know?

People who joined us from all over Australia wanted to know the best way to get involved in the media conversation and taking to social media to point ill-informed coverage to evidence-based research, would be a powerful place to start. 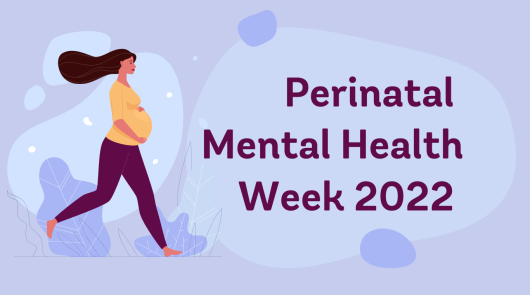 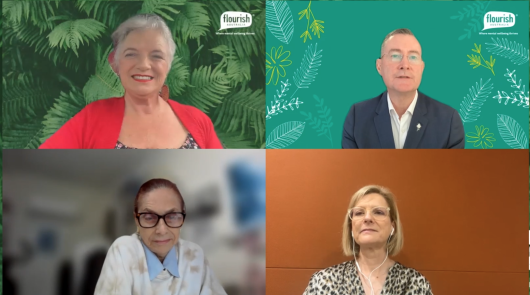 Our own Jade Ryall, offered a warm acknowledgement of Country for Flourish Australia’s free onl... 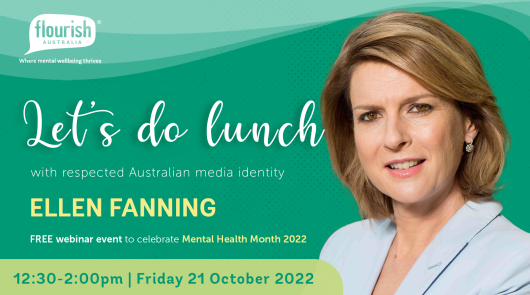 Let’s Do Lunch with Ellen Fanning this Mental Health Month